After appearing less family-oriented during the first debate for governor of Wisconsin, Mary Burke appears to have outsourced a family in order to compete with Scott Walker on family values. While the Burke campaign claims her family is legitimate and had been kept under wraps to protect its privacy, Walker’s campaign claims Burke is making a mockery of family values by outsourcing to other continents. Real Wisconsin News has delved into the backgrounds of the newly-announced Burke family.

Mary Burke, according to her campaign manager, has been married to Amadou Keita Burke from the Ivory Coast for some time now. Specifics were not given as to when the union took place. However, Mr. Burke did answer some questions when he was reached at Mrs. Burke’s residence. “We have been married for some time,” he said in a thick French-African accent. “Mary, like most women, some of whom do not like to admit it, was attracted to my big black shumen cock. I call him Monsieur Coq. He is the rooster my family had imported all the way from Bulgaria. Also, when we married, as is tradition, my family gifted Mary’s family with 40 goats to demonstrate how worthy she was as a wife.”

Burke’s family has not been able to substantiate the claim that they received any kickbacks from Keita’s family for Mary’s hand in marriage. Additionally, Amadou was asked why he has taken on Mary Burke’s last name. “Would Oprah take on Stedman’s name? Would Cleopatra take on Antony’s name? Would Portia take on Bassanio’s name?” was his response. “People in my village have been taking on the woman’s name in marriage for many, many years, especially when her family has more goats and chickens, and my wife owns the equivalent of many thousands of goats and chickens. Scott Walker only works for those who own billions of goats and chickens, but he himself is as poor as a drifter from Eritrea and just as likely to be seduced by a rich man for entertainment purposes.” At this, Amadou laughed for as long as it took Mary Burke to think of something positive about Scott Walker during  their first debate. 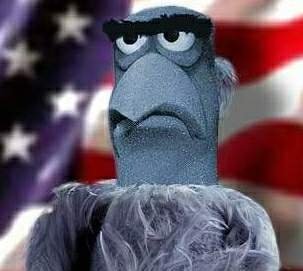 When asked about the Asian child who has also suddenly become a member of the Burke family, Amadou said, “This is our love child because we love her. She is a beautiful caramel to compliment my dark chocolate and Mary’s ivory. Do not think for a moment that she is a product of an adoption mill in China or that I am a mail order husband because that would not be true. I love Mary Burke, even if she looks like Sam the Eagle from the Muppets. Ah, I am more funny than a bridge salesman in Aoulef. Anyhow, our daughter’s name is Madison and we are getting her a “Made in America“ t-shirt to demonstrate that Mary Burke to demonstrate that all Americans want to be able to produce small, breakable, cheap items like those produced in Chinese sweatshops right here in our own sweatshops.

Real Wisconsin News has discovered that the t-shirt in question is made in Thailand. When asked why Mary Burke would create such an elaborate ruse in order to trick voters, Amadou ventured, “Have you seen Tonette Walker paraded in front of family-minded voters like a piece of meatloaf or the two boys prancing in front of crowds like male prostitutes at the Black Diamond in Nairobi.”

In a separate statement, Mrs. Mary Burke added: “I love my family and it's times like these, I'm proud to be an American. However, questions about our family situation are off limits and private, so I’d appreciate it if everyone can just accept Amadou, the Chinese kid, and me for who we are: the typical American family worth millions that outsources here and there in order to remain competitive.”